Strength of the Greek Fleet at Salamis

Herodotus gives the following number of ships for the Greeks – “the Athenians with 182 ships, half the whole fleet, – 40 from Corinth; 30 from Aegina; 20 from Megara; 20 from Chalcis; 16 from Lacedaemon (Sparta), 15 from Sicyon; 10 from Epidaurus; 7 from Ambracia; 7 from Eretria; 5 from Troezen; 4 from Naxos; 3 from Hermione; 3 from Leucas; 2 from Ceos; 2 from Styra; 1 from Croton; and 1 from Cynthnus. The total number of warships was 368.
“It was under the commander, Eurybiades, a Spartan but not of royal blood… For the other members of the confederacy had stipulated they would not serve under an Athenian. The Athenians waved their claim (to command the fleet) knowing that a quarrel about the command would certainly mean the destruction of Greece.”

Strength of the Persian Fleet at Salamis

Herodotus also writes. “The fastest ships were the Phoenician. All the ships carried Persians and Medes as marines…” Most of these marines would have been archers using composite bows for the Persians relied greatly on the bow in their battles. Ancient Greek historians later referred to the war with the Persians as the ‘War of the Spear against the Arrow’. Against the armoured Greek hoplites with their large round bronze shields, in their closed ranks, and who were trained to move swiftly, the Persian archers would have been at a great disadvantage once their ship was rammed and boarded as the stand off range and killing power afforded by the bow would be negated.

Prelude to the Battle

The Athenians evacuated most of their civilian population to the large island of Salamis, out in the bay and not far from their city. A small group of hoplites stayed in the city to defend the natural fortification and temple complex which was the Acropolis – for even in such overwhelming circumstances the Greeks refused to abandon their gods. The defenders on the Acropolis though were quickly overwhelmed and the city was burnt by the invading Persian Army. “Having left not one of them alive, they stripped the temple of its treasures and burnt everything on the Acropolis. Xerxes, now absolute master of Athens, despatched a rider to Susa (his own capital) with news of his success.”

A council of the Greeks was hurriedly convened on Salamis. Many in the council argued that the fleet and the population should withdraw behind the wall then building on the Isthmus to the south, but Themistocles, whose idea it was to build the fleet persuaded them to fight at Salamis. “We shall be fighting in narrow waters, and there, with our inferior numbers, we shall win. Fighting in a confined space favours us but the open sea favours the enemy.”

Opening Phase of the Battle

The island of Salamis straddles the entrance to the Bay of Eleusis. There are only two narrow channels around the island which lead into the bay, both of which can be easily blockaded. The Persians blockaded the western entrance with their Egyptian warships whilst assembling most of their fleet in the wider channel to the east. The Greek fleet lay at anchor in a bay of the island inside this eastern channel. “The Greeks were in a state of acute alarm, especially those from the Peloponnese; for there they were, waiting at Salamis to fight for Athenian territory, and certain, in the event of defeat, to be caught and blocked up in an island, while their own country was left without defence, and the Persian Army that very night was on the march for the Peloponnese.”

Aeschylus, an eyewitness to the battle later wrote that the Persians were drawn up in three lines outside the entrance to the channel. On the mainland nearby, a throne was erected from where the Persian King Xerxes could watch the battle.

On 20 September 480 B.C. at the break of day, the Persian fleet began its advance through the eastern channel. The lines formed up into columns with the Phoenicians leading. “The Athenian squadron found itself facing the Phoenicians on the Persian left wing.” As the Phoenicians came through the channel, which was about 4 miles (6.4kms) wide, they faced the Greek fleet which was in an ‘L’ formation. The Greek ships suddenly began to back water, leading the Persian fleet further into the narrowing channel. “The Greeks checked their way and began to back astern; and they were on the point of running aground when Ameinias of Pallene, in command of an Athenian ship, drove ahead and rammed an enemy vessel. Seeing the two ships foul of one another and locked together, the rest of the Greek fleet hurried to Ameinias’ assistance, and the general action began. Such is the Athenian account of how the battle started.”

Other ships lay in wait in the bay and now ambushed the Persians on their left flank, driving them towards the shore of the mainland. In the ensuring confusion, the Persian ships began to crowd the narrow channel which was now only about 2 miles wide. Herodotus wrote, “The Greek fleet worked together as a whole, while the Persians had lost formation and were no longer fighting on any plan. None the less they (the Persians) fought well that day – far better than in the actions off Euboea. Every man of them did his best for fear of Xerxes, feeling that the king’s eye was on him”

Main Phase of the Battle

The Persian ships in the narrow channel had difficulty in turning to meet the enemy. Their speed would have been slow and in many instances they would have been broadside to the ramming Greek ships. Herodotus recorded, “The greatest destruction took place when the (Persian) ships which had been first engaged turned tail, for those astern fell foul of them in their attempt to press forward. The enemy was in hopeless confusion; such ships as offered resistance or tried to escape were cut to pieces…. Such of the Persian ships as escaped destruction made their way back to Phalerum and brought up there under the protection of the army.” By sunset the battle was over. “Amongst those killed was the son of Xerxes’ brother, and many other well-known men from Persia. There were also Greek casualties, but not many; for most of the Greeks could swim. Most of the enemy, on the other hand, being unable to swim, were drowned.” Though Herodotus names many of the Persian commanders killed in the battle there is no mention of ship losses. “After the battle the Greeks towed over to Salamis all the disabled vessels which were adrift, and then prepared for a renewal of the fight, fully expecting that Xerxes would use his remaining ships to make another attack…” But the Persians were defeated and Xerxes, realising his sea borne logistics lines were no longer safe, reluctantly ordered his fleet, and thus the army, to withdraw. The losses suffered by the Persian fleet were thought to be a third or more of its total strength (450 ships). Although not a decisive defeat it was enough though to force the Persians on the defensive. A year after the Battle of Salamis, they were decisively defeated in a land battle at Plataea which brought the Persian invasion to an end.

What would have happened if the Battle of Salamis had been lost? The Athenians had already made plans in the event of such a loss. Transports and warships were ready to evacuate the Athenian population from the island under cover of darkness. They were to be resettled in the Greek colonies in either Sicily or Southern Italy. It was possible that other Greek cities faced with defeat by the Persians would have followed, for it is doubtful that the wall across the Isthmus between northern and southern Greece would have stopped the invaders. Athens and her allies would have dominated Italy, and perhaps there would have been no Rome – western history would therefore have taken a different course. 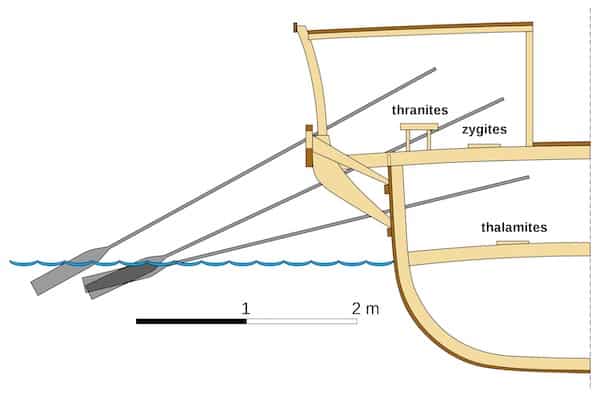 Athenean Trireme main characteristic used to be their speed of up to 12 miles that sailed in a short period of time, with which the well educated crew became terribly advantaged over the naval battle, a thing that made action by Athenians, from the season of Persian wars until afterwards season of Peloponnesian war, developing the maximum of its potential. In order to achieve this, the Athenians moved each year their fleet for training. The new tactics that imported the Athenians ” penetration with inversion” and “circumnavigation” made them invincible in the sea because up to then the naval battles reminded more a foot battle rather than naval battle, while with their new tactics the Athenians, ramming and abandoned the enemy ships except battle.

During the 7th century B.C. the Corinthian shipbuilder Aminoklis manufactured the first trireme on behalf of the tyrant of Samos Polykratis.

It was a constructional development Bireme with 50 oars, adding architecturally (without increasing its maximum height) a line of oars. It has 2 sails, the main in the center that and the small near in the prow. In the water line, in the prow, it has a bronze ram that was useful for the ramming.

The Athenians were the first who occupied the value of new arm and began the shipbuilding of fleet. The crew of trireme was constituted from the general and his officer, 2 with 3 officers at length of boat, 2 steersman, piper man, 172 (roughly) oars men, 10 with 20 marines (soldiers, archers and spearmen), 10 with 15 auxiliary crew, that is to say 200 individuals roughly speaking. In a lot of cases the oars men had their arms with them and fought as land troops. Each trireme had supplies of feeding for 3-4 days (reason of space).

From the season of general Kimon, we have the first armoring Triremes, that is to say, they added a “deck of battle” above oars men offering to them protection from arrows and spears, allowing to the marines to be moving comfortably and quickly in all the length of boat and fight comfortably. Beyond martial Triremes existed troop carriers, horse carriers, postal. The last ones were ships in particular because of their swift velocity. (Paralos and Salaminia) and they were considered holy!