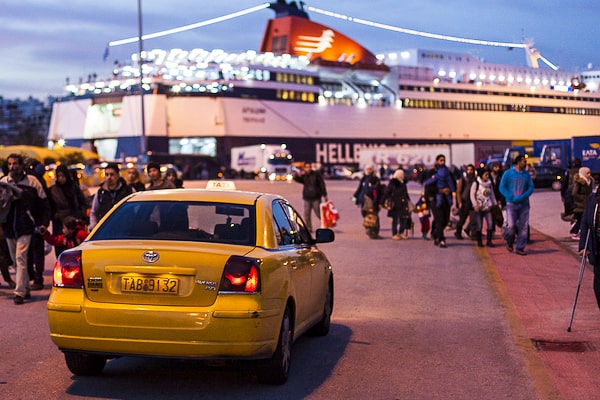 Taxis in Piraeus or Athens are reasonable, cheap and quite easy to find. Sometimes taxis are shared with others if passengers are travelling in the same direction. Often if the taxi driver don’t like your destination he refuse to take you. Always make sure that the taxi meter is running and that it is not showing “2” – this is the double fare for use late at night. Always use licenced yellow cabs. Official Taxis in Piraeus or Athens are marked with the word “Taxi” written in black lettering against white background. Some taxi companies offer online reservations this can be more expensive but always more safe and never shared with others.

Taking a taxi can be a great option when you have a limited amount of time to explore Athens, because the drive from the cruise terminal to the city takes about 20 to 30 minutes and can be quicker than walking to the train station and waiting for the next departure to Athens.

In addition, taxis are very useful for passengers with disabilities or those who have many bags with them, because the driver can assist with getting in and out the car.

A crucial tip to remember when ordering taxis to get from the port to the train station is to not pick up taxis at the port’s cruise terminal; these vehicles will only take passengers to the Acropolis in Athens and cost a lot more than a trip to the Piraeus station. Some of the taxi drivers are known to be aggressive with approaching tourists and trying to persuade them to take pricy tours of Athens rather than simply driving you to the city, so resist those offers.

Instead, look for the likely long queues of tourists waiting for the reputable taxis to take you to Athens; they are the cars that will be painted yellow with yellow and black signs.

Another trick that drivers sometimes try to pull on tourists is to pick up extra passengers you don’t know if you are going to the same destination in Athens. Each passenger pays their own fare, so this won’t make you pay more but it can be an inconvenience while the other passengers get in. To avoid this, tell your driver when you get in the car that you want to travel alone and you don’t want them to pick up additional passengers on the way.

Once in the car, make sure that you tell the driver to start the meter at the beginning of the journey. Sometimes unscrupulous drivers leave the meter off so that when they get to Athens they can tell you the ride cost more than it should have. Expect to pay a fare of roughly €30 if the meter has been activated at the start and you have a fair driver.

Before using a taxi, you should also be aware of the following.

Traveling to a foreign country can be intimidating, and the threat of getting ripped off doesn’t help. Most European countries have cracked down on scammers preying on tourists, but Greece, despite being known for its friendly locals, still has some issues with its taxi drivers. But, there’s no reason to fear. With the right know-how, you’ll be well defended against ill-meaning drivers. Here are some tips on what to look out for and how to prevent taxi scams in Greece.

Most scammers prey primarily on tourists. Hotspots are mostly at international airports, like in Athens airport or Mykonos Airport, or at the cruise ports, like in Piraeus. In Athens, you should also be careful at popular tourist attractions, like the Acropolis. When you’re at the airport, there are designated taxi dispatches, where you can wait in line for a policeman to lead you to an official taxi. This strongly discourages taxi drivers from scamming tourists, as their airport privileges can be revoked for misbehavior.

First off, make sure you’re getting in an official licensed taxi. They’re certainly not hard to miss. All official taxis will be painted bright yellow, so if someone’s asking you to get into a different-colored car, that’s the first sign of a scam. Secondly, all taxis should have a roof-mounted taxi light. If the light is not switched on, the taxi is not available. If the driver has his or her lights off, asking him for a ride or a fare will automatically expose you as a tourist. If you’re not somewhere with a designated taxi stand, you can wave taxis down in the street. However, the same protocols with taxi lights and colors apply anywhere in the country. Ignore anyone else who tries to offer you a ride. Many hustlers wait at the end of lines or in major tourist areas to con tourists.

Learn the Protocol Inside

Most locals know the procedure that taxi drivers are meant to follow. Most tourists do not, making it easier to con them into a higher fare. It helps to know what to expect, and what you should expect from your driver. First, your taxi driver is required to turn on the meter as soon as you get in the car. If they don’t, kindly ask them to turn on their meter. If they give you trouble, tell them the ride is over, and ask to get out of the car. Second, the meter can calculate a few different rates. Rate 1 is the standard daytime rate within the city, while Rate 2 is the rate outside the city or the nighttime rate. It’s worth noting that the daytime rate lasts from 5:00 AM until midnight, so don’t fall for any driver charging you the nighttime rate just because it’s dark outside. The meter will read 1 or 2 based on which rate you’re receiving. Speak up if you see the wrong number on your meter.

Rides to and from the airport or other ports and terminals have a flat rate, that operate on the same night or day fare structure. The current fixed fare from the Athens Airport to the city center is 38 euros during the day, and 54 euros at night. Ask an official inside the airport if you’re unsure of the proper fare. No other routes should have flat rates, so don’t take a ride from anyone who offers you one. Lastly, don’t let drivers pick up any other passengers along the way. They will try to double charge you for any detours they take. Officially, drivers are not allowed to take on any other passengers without first asking and receiving permission from the current passengers.

A common scam for taxi drivers is to claim they didn’t receive the correct amount of money. If you hand them a 50-euro note, they may drop it, then pick up a 20-euro note and claim you still owe them more. To avoid this, pay in smaller bills, and make sure you hold the driver’s attention and count off the bills. Keep an eye on the driver as he’s counting your bills and your change. Be absolutely certain that you have gotten the correct amount of change.

In addition, taxis are required to provide you with an official receipt listing the license and taxi number upon request. Do not accept any handwritten receipts. Report any taxi driver who says they can’t give you a receipt or insists on giving you their own. Do not, under any circumstances, pay a rate in advance.

Taxi drivers in Greece are legally required to take you to your destination via the quickest route possible. Some scammers will try to trick you by taking an extremely long route, all while running up the meter. Most drivers can get away with this, because tourists often don’t know their way around. If you’re concerned, make use of Google Street View prior to your trip, and get an idea of what your route is supposed to look like. You can also follow the driver with GPS in real time. If you see a driver going the opposite direction, or taking a lot of “wrong turns”, tell them which way they are supposed to go. Knowing their passenger is wise to their con may discourage them.

Your taxi driver may try to presuade you to go to a different hotel or restaurant. This is usually because they receive a commission from the owners for increasing traffic to their business. Insist on going to your initial destination. You can make a point by calling ahead and telling your hotel that you’re on your way. Providing the taxi number will further discourage your driver from leading you somewhere else.

Understand that you can report any and all violations that occur. Greece has a national tourist police phone number that you can call 24/7. If a driver makes you uncomfortable or gives you trouble, tell them you will report them to the police, and they will usually back down. If you feel unsafe, don’t hesitate to call the emergency number, 1571.

Greece is a beautiful country, and there’s no reason to have it spoiled by a greedy taxi driver. By taking the right precautions and being prepared, you’ll be savvy enough to thwart any attempts for your extra cash.