Piraeus Archaeological Museum offers its visitor a representative and complete picture of the history of the city, which, during antiquity, flourished as a commercial centre of the Eastern Mediterranean as well as the naval dockyard of ancient Athens. The type of its exhibits, coming mainly from the wider region of Piraeus and the Attic coastline, and the time frame that they cover, from the Mycenaean up to the Roman times, render them representative of the singularity, the population composition and the history of Piraeus.

The collections of the museum consist mainly of excavation finds or accidental findings and of deliveries of antiquities, while they have also been enriched by the donations of private collections, like the Meletopoulos-Nomides Collection and, more recently, the Geroulanos Collection.

The museum is housed in a two-storey building that frames, on the western and southern sides, the Hellenistic theatre of Zea and has a total surface of 1.394 square metres (m2). Its exhibition rooms occupy the ten halls of the two floors (1.044 m2), while in the basement (350 m2) are located the laboratories for maintenance of clay, metal and stone objects, as well as the repository of the museum, where the archaeological finds from the region of Piraeus, the coastal zone and the islands are being kept. The building of the old museum (330 m2), situated close beside the new one, is being used today as a sculptures repository, while at the archaeological site of the Zea theatre there will be an open-air exhibition of sculptures. 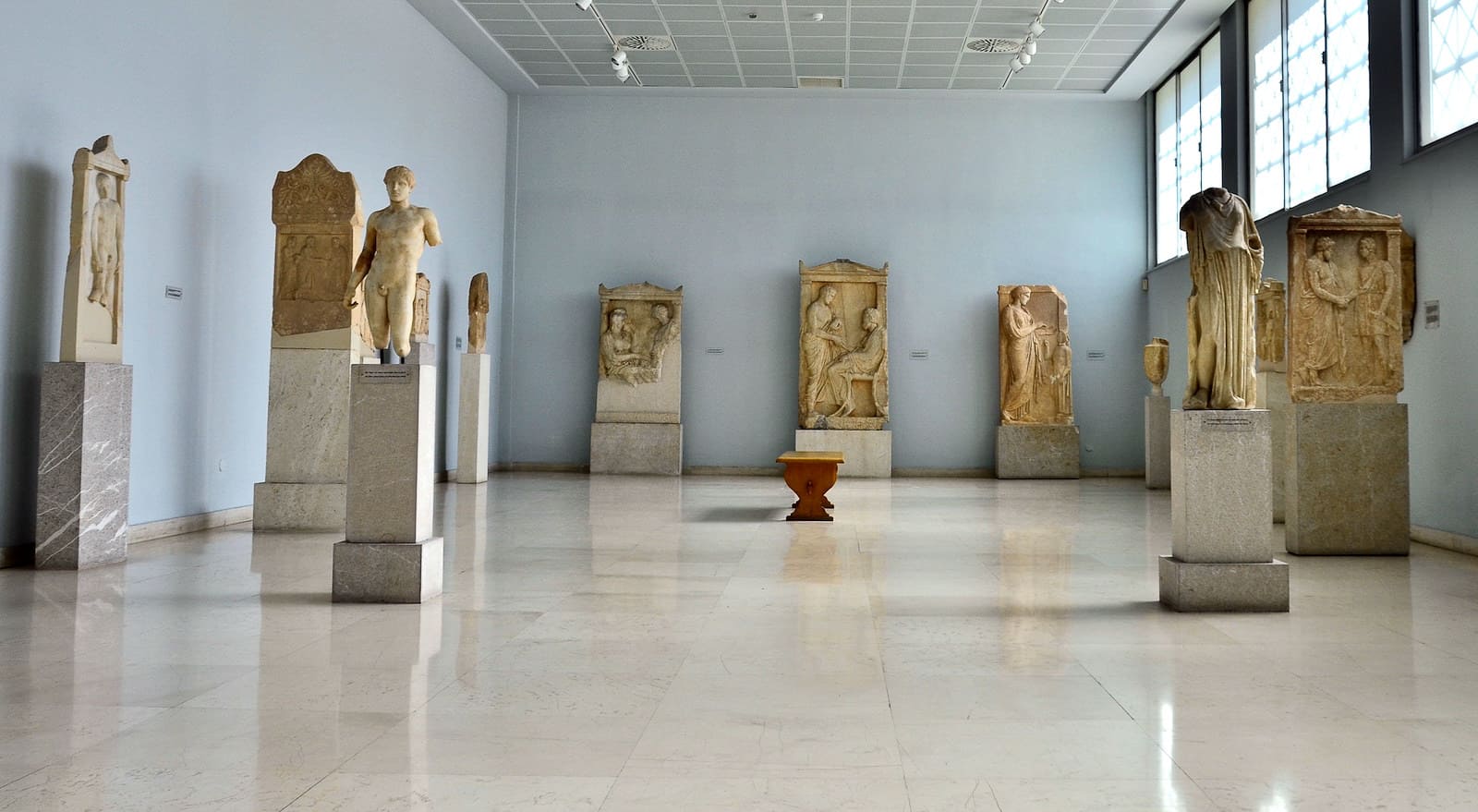 The Museum’s activities include the organisation of educational programs, lectures and other cultural events.

The exhibits pertain to the double -commercial and military- function of the ancient city of Piraeus. The first one is represented by interesting evidence concerning the economic life of the ancient “agora” (market place and civic centre), which relate mainly to the activity of the “agoranomoi” (market overseers – an electable official position in the cities of Ancient Greece that controlled the order in the marketplace) and the “metronomoi” (official representatives (5 in Piraeus), supervisors, mandated to keep the “meters” (the original public weights and measures) by which to check the accuracy of the copies used by traders in their dealings). Typical exhibits are a metrological relief that was found in Salamis, the meter for the sale of liquids and one market control list. The military character of the port is shown through objects that are related to ancient warships.

The most important and impressive exhibits of the museum, the bronze statues that were found near the harbour of Piraeus in 1959, are presented in two rooms.

The fifth room of the museum houses a representation of a typical sanctuary of the Classic era.

Well known sepulchral reliefs, from the unique -in extent and quality- collection of the museum, are presented here. The exhibition offers an excellent picture of the perception of death, but also of the progress of classic art from 5th to 4th century B.C.

The Hellenistic plastic art is represented by few works, but of exceptional quality, which are distinguished by grace and delicacy. During this period, Piraeus knew decline under the influence of the Macedonian rule, separated as he was from Athens.